Outrageous ... hilariously tortured ... cleverly wrought ... the humanities are in safe hands this year.

There is no doubting Mooney's intelligence and talent. ... barbed and brilliant...

On behalf of University Theatre and the students in my class, I thank you for your excellent workshop today. The clarity of your communication regarding text work was inspiring. I particularly enjoyed your Tartuffe performance.

As two French teachers experienced in the teaching of Moliere's works, we thoroughly enjoyed watching the characters come to life in Mr. Mooney's portrayals. The witty translations captured Moliere's essence, including satire, irony, and ribald references. His animated features, set off by a variety of wonderful wigs, and his energetic stage presence were an important element of the comedy. We have recommended this show to our students for a glimpse into the true world of Moliere.

Combine Timothy Mooney’s refreshing, clever rhyming couplets with his manic energy and impeccable sense of comic timing, and what results is two hours of delightful theater.

Moliere's cast has all come down with food poisoning! Worse... They've been to see doctors and, as such, are now confined to bed! This leaves Moliere to entertain the audience all by himself (praying that no one asks for a refund...)! And so, he proceeds to lead them through his favorite monologues and scenes: "Tartuffe," "The Misanthrope," "Don Juan," "The Bourgeois Gentleman," "The School for Wives," "The Precious Young Maidens," "The Doctor in Spite of Himself," "The Imaginary Cuckold," "The Schemings of Scapin," and "The Imaginary Invalid." He plays scenes to unexpecting audience members, pulls volunteers from the audience, and climbs over the audience' laps, while working his way through the funniest theatrical catalogue in history! Timothy Mooney, living a "parallel existence with France's greatest playwright, has not only rewritten most of Moliere's plays into fresh rhymed iambic pentameter, but, playing Moliere, in "Moliere Than Thou," has introduced over a hundred thousand people to the man who is, perhaps, the funniest playwright of all time! 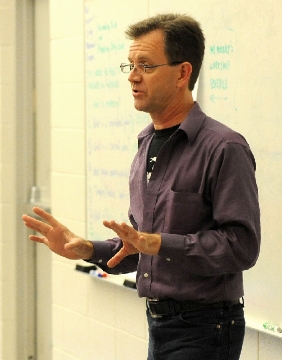 Timothy Mooney, author of the new acting textbook "Acting at the Speed of Life; Conquering Theatrical Style" and "The Big Book of Moliere Monologues" has given over a hundred thousand students their first introduction to Moliere through his one-man play, Moliere Than Thou. Mooney also presents one monologue from every Shakespeare play in the one-man show, "Lot o' Shakespeare," and a series of great historical speeches in "The Greatest Speech of All Time." Mr. Mooney is the former Founder and Editor of "The Script Review" and was the Artistic Director of Chicago's "Stage Two Theatre," where he produced nearly fifty plays in five years. When Stage Two turned to the classics, Mr. Mooney started writing new versions of the plays of Moliere, with a mischievous sense of rhyme. He has now written seventeen iambic pentameter variations of the plays of Moliere, produced around the world. High School productions of Mr. Mooney's "The Misanthrope," "The Miser," "The Imaginary Invalid," and "Tartuffe" have gone on to state finals in Massachusetts, Wisconsin, Virginia, North Carolina and Alabama, while his "Doctor in Spite of Himself," took third place in the Scottish Community Drama Association National Festival, and was a finalist at Italy's Sanremo Global Education Festival. Mooney created "Criteria" as a short story, in 2002, and has been performing it live as a "One-Man Comic Sci-Fi Thriller" since 2003. Mr. Mooney continues to present his one-man shows across North America and recently presented both "Moliere Than Thou" and "Lot o' Shakespeare" at the Oregon Shakespeare Festival, as well as festivals, schools and conferences across the United States and Canada. He can be found in hundreds of videos on the internet, presenting Moliere, Shakespeare and much more, along with clips from his acting workshops.

Get it at Amazon